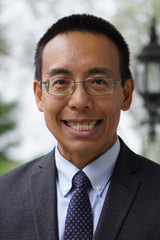 Dr. Shieh grew up trained on the East Coast until coming to the Bay Area in 1992 to train at California Pacific Medical Center. He graduated from his residency with distinction in 1996 from Wills Eye Hospital, one of the oldest and most prestigious training programs. Since then he has worked serving the Sonoma County population, first at Kaiser Santa Rosa before joining North Bay Eye Associates in 2016. Dr. Shieh is a comprehensive ophthalmologist, and has performed over 6000 cataract surgeries.

He is married and has two teenage girls. In addition he enjoys photography and travel. He has completed several triathlons, marathons, and century bike rides, including finishing the 70.3 Vineman Ironman Triathlon twice.